Musicians are magicians.  It’s true.  They take feelings and externalize them in sounds that communicate and celebrate—a trick no less remarkable than pulling a rabbit from an apparently empty hat.


For my film DEADLY REVISIONS, we decided we wanted a Christmas song in the background of one scene.  We didn’t have the budget to spend thousands and thousands of dollars to buy the rights to use a known song.  So I talked to my friend Renaissance man Jacob Vanags who, among other things, is a musician and he whipped up a perfect jingle-bell tune overnight.


Next, I needed a song to augment a brief montage of the two leading men enjoying a good time—one of the few breaks from the tension in the story.  I approached Noah Woodburn of New North Sound who was eager and willing to help.  I sent him the scene, a description of what I was looking for along with some lyrics to guide him.  In a matter of days, with the talents of singer/songwriting duo Tyler Johnson and Julia Cramer, a song was created.  We tweaked it a bit to get the sound just right and a few days later, it was done.  I sent it to my composer Andrew Todd Poole who found the perfect place to have the song start and end, expertly matching music to action and lyrics to images.


And—poof:  the film has two songs that work brilliantly.
Just like magic.


Want some magic in your life?  See the links below.

Jacob Vanags:
Piano-rocker Jacob Vanags has played across the country at clubs such as the Lyrikplatz stage at Musikfest in Bethlehem, PA, The Bitter End in NYC, The Bottom Lounge in Chicago, and Republic of Pie in North Hollywood.  http://www.reverbnation.com/jacobvanags


Noah Woodburn:
Noah is a composer, music producer, sound designer and owner of New North Sound in Portland, Oregon. New North Sound is a fully equipped sound and music facility specializing in custom work for the film and tv world. Noah Woodburn also plays in a band called Goose & Fox who will be releasing their debut album "My Mouth, the Sea" on September 12th, 2013. Goose & Fox is an indie folk/pop band based out of Portland as well.
www.newnorthsound.com
facebook.com/gooseandfox
Posted by Gregory Blair at 9:40 AM No comments:

And the Award Goes To…

Film is a collaborative art.  I’ve said it before and I’m not the first. This is why any award or accolade—even if given to an individual—is really a laurel honoring all the people who were part of the process that led to the final product.  An actor’s performance in a film is a variable alchemy of the actor’s craft, the direction, the editing and much more.  Many elements combine in a special sort of synergy to create what we end up seeing on the screen.  For a director, the symbiotic group dynamic extends to the entire crew…and beyond.
Earlier this week, I was awarded the EOTM Award for “Best Director of an Indie Horror Film” for my feature DEADLY REVISIONS.  By now, it will come as no surprise when I say that the award belongs to everyone involved with the film: the crew, the cast, the funders, fans and friends; everyone played a part in supporting the film and, by default, me as a director.  I had my indomitable co-producer Roxy Shih to wrangle and facilitate production needs, my astute director of photography Kate Sobol to devise ways to make each shot work well, numerous and tireless production assistants who kept unseen cogs greased, Facebook fans who shared our stills and updates to their friends...and the beautiful people who poured money into the production; all of these people and more are a part of the creation and life of this film.
So to all those people, I of course extend my thanks; not just for helping to manifest an award, but for helping make this incredible film that, I hope, will be something of which we can all be very proud.  The award on my mantle is in honor of us all.  And I couldn’t be in better company. 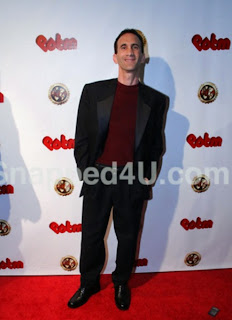 Posted by Gregory Blair at 4:00 PM No comments: