Once More Unto The Breach 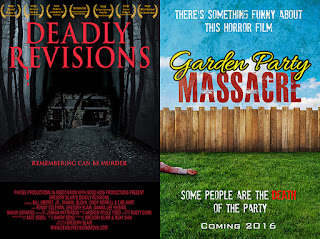 It’s not news that making a movie is difficult.  My first feature “Deadly Revisions” proved no exception and provided me a cornucopia of complications and conundrums through which I learned valuable lessons. Daily challenges emerged for me to struggle with and overcome: some related to time, others to technical difficulties, artistic clashes, manpower issues; you name it, I dealt with it.  Completing a film is such a monumental task, only the mad ever do it a second time.
Well, I must be mad.  For, at this writing, I have just completed principal photography on my second film, “Garden Party Massacre”.  But, truth be told, it was easier this time, thanks to the lessons I learned the first time around.  For example:  limited locations are nice; one, single location is nicer.  One camera is required; two are preferred.  Night shots are heavenly; lighting them is hell.  And so on.  So I wrote “Garden Party Massacre”—a story that takes place one, sunny day in a single location…and I planned to shoot it with at least two cameras.
I also crewed up a bit wiser.  I didn’t have a full-time script supervisor on “Deadly Revisions”, so continuity issues were up to me to catch most days.  I had one for “Garden Party Massacre”: the brilliant Amy Coughlin--who did a far better job than I, leaving meticulous notes for my editor.  I also traded in some electrical hands for that second camera operator.  You can’t always shoot with two cameras simultaneously:  certain lighting setups or complicated shots require single camera action.  But you can often shoot opposing over-the-shoulder shots at the same time or get a medium shot and a close up at the same time; this allows you to cut your shoot time down dramatically and lessens the demand on your actors to repeat the same intense scene too many times.  My DP Nate Cornett handled the first camera and John Hill handled the other.  I had worked with both of them before—as an actor—and knew I was in good hands.
And so, with a great crew, a talented cast and buckets of blood, I forged once more unto the breach and slayed the many-tentacled beast that is film production.  And if you’ll forgive me pushing the metaphor and boasting, I think the result is going to be a monster hit!

Posted by Gregory Blair at 8:16 PM No comments: