While every film set echoes the next, each one also varies and has its own character.  A faux French new wave shoot earlier this year had a guerilla crew of one: cameraman, director, sound and lighting responsibilities all resting on a single pair of shoulders, making for an easy shoot and an appropriately rough and unrefined looking final product.   On the other end of the spectrum, my latest shoot has a large crew and tons of heavy, bulky machinery--making the process comparatively slow for the necessarily meticulous attention to create a very controlled and pristine stylized look. 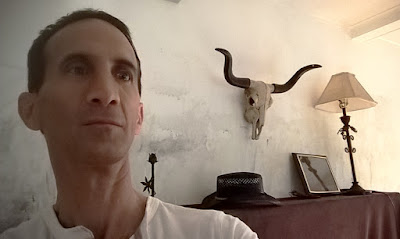 Art direction: ranch dressing.
The film is called “Look Back” and it tells the tale of a detective who discovers the serial killer he’s been chasing is from his own childhood home, causing him to look back to see how two boys from the same home could end up on such different paths.  My character is in that flashback story: the leader of a gang of outlaws and the father figure for both boys.  The fresh twist is that the “family” is made up entirely of gay men:  loners and kidnap victims who work the fields of contraband crops on a ranch far from the outskirts of town.  The patriarch I play is alternatively kind but controlling, nurturing but punitive, peace-keeping but prone to sudden violence.  He's a schizophrenic character in a gritty, desolate and insular world.  And he's the nice guy.  It's no surprise that different personalities emerge as a result of the alchemy.  But a cop and a killer? 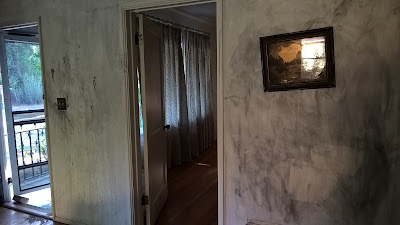 The house that created a killer.


The quality and quantity of crew and equipment to shoot each scene is impressive: a slick Alexa Arri camera, curved dolly rigs, jib shots and more bodies than one house should hold—frat parties aside.  On a single day, we only shoot three scenes because the camera and lighting setup is extremely involved.  But the end result is wall to wall, gorgeous footage.  My first day included a poignant moment in a sunbeam-streaked boy’s room, an inauspicious meet and greet in a hazy-shadowed basement and a stark, steamy encounter in a disheveled bedroom—each scene made up of countless, varied shots of design and maneuvering to delight even the most discriminating film snob. Day two's piece de resistance involved three different dolly tracks, rain, lightening and blood: the result a visually sensuous but contextually disturbing scene. 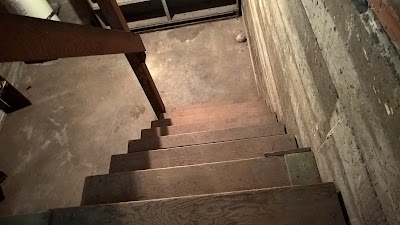 
It's always a pleasure to be surrounded by a swarm of skilled professionals working together with quality equipment to create cinematic magic.  It's a privilege to be the center of all that attention and a duty to honor that attention by giving a performance that makes the director's vision come to life.   That, in a nutshell, is the actor's job.  And it's what I'm here for.
Posted by Gregory Blair at 9:08 AM 2 comments: