Welcome to the Party!

Some people are party animals.

I’m more of a party begonia; a begonia in serious need of water.  By that I mean, if I don’t know folks at the party, I have trouble not planting roots in one spot and feeling like I’m slowly wilting.  I tell myself I probably feel far more stupid than I actually look.  I could be wrong.


Now that may sound funny coming from a guy who’s an actor.  After all:  actors get up in front of hundreds of strangers and do all kinds of things, right?  They can’t be shy or socially awkward.  Well, I’m here to bust that myth wide open.


On stage, in character, I’m whatever I need to be.  That’s true.  But the lines are all written and memorized and my attitude, stature and poise are all meticulously planned.  At a party, it’s all improv and it’s all me.  The trick is to be scintillatingly charming, quick-witted, anecdote rich and effortlessly photogenic me.   On a good day, I can be two out of three.  To try to be all four at once makes me feel like Sisyphus…with syphilis.


Now the other possibility is that the extroverted actor side of me only comes out when I’m on stage or in front of a camera…and the reclusive writer side of me skulks around at all other times.  This would make my life akin to a kind of twisted version of Superman:  put lights on me and I leap tall screenplays in a single bound; otherwise I’m all tongue-tied, clumsy .


But I throw myself out there into the party world and the rewards are worth it.  I get to see new places, meet new people and get out of my comfort zone—which is always good for growth and I’m a big proponent of growth.  (Or maybe, being only 5’7”, I’m just a little proponent of growth.  Yuk, yuk.)  Also, as an actor, it’s good to give new people the opportunity to meet me; I could be perfect for their next film.  I mean, they could be planning a sequel to “The 40 Year Old Virgin”, right?


The last industry party I manage to make an appearance at is a little different.  This is because I actually know a few people there which, thankfully, happens more and more as I  continue to work in the business. I still have to make my entrance alone (which always feels like I’m an ugly Cinderella arriving late to the ball) and wander through a mostly unfamiliar crowd.  But the venue is Boardner’s in Hollywood, which is a great space and the event—the opening night party of Shriekfest—is set up in spectacular fashion, with the red carpet leading directly to the food and drinks, the press upstairs and the music lively and festive.


I shuffle through the crowd and look for the few friends I am hoping to find.  For a gathering of horror fans and filmmakers, the crowd isn’t the least bit scary.  In fact: I wonder, as I circle, looking for familiar faces, if I’m actually starting to scare some people:


“That dude in the shiny blue shirt has walked by me three times.  Should we call security?”


Eventually, I do manage, to find most of my friends…and along the way, I meet a few really interesting folks.


Now:  did I feel completely comfortable at any time during the event?  If you read the first paragraph, you know that answer.  But you also know that I’m okay with the unease; challenges to my shy, social awkwardness help me to lessen its severity.  And it no doubt provides other people amusement and anecdotes to share at their next party:

Check out the Shriekfest Film Festival at:
http://www.shriekfest.com/

Posted by Gregory Blair at 8:34 AM No comments:

Can a raucous, silly web series actually be considered art?  Without me in it?

Sir Philip Sidney said the purpose of poetry is to “teach and delight”, meaning that for poetry to achieve greatness, it must do both. I think to do both in any artistic medium puts the resulting work on a higher level.  The new web series “Husbands” achieves both, flawlessly.

With its premise based on the comedic tradition of the “happy idea”, the husbands of the series are a pair of secret, somewhat Odd Couple lovers who’ve had the happy idea to get hitched one blind-drunk night in Vegas.  Then they wake up with hangovers, wedding rings and total recall. Since they’re both in the public eye (one is an actor and one a baseball player), the news gets out fast.  Their only course of action is to make it all seem planned--thereby giving it a positive spin--and then to see the marriage through in order to remain the credible role models they desire to be.   Unexpected situations, crackling dialogue and a screwball best friend add to the hilarity.

So “Husbands” does, indeed, delight.  But it also teaches.  We’ve all seen romantic comedies involving marriage (accidental or not) and how crazy it can get.  But the invention here is that the couple is made up of two gay men.  That not only makes it fresh, but allows for lessons by comparison:  we see the guys struggling with much the same things with which straight couples struggle (moving in together, compromise, new relatives, etc.), thus illuminating the fact that—at our cores—most of us are more or less the same, straight or gay.
Therefore, by successfully managing to teach and delight, I argue that “Husbands” is a work of art.  It may not be everyone’s cup of tea, but what is?  And just because you don’t like a work of art, does not diminish it.  Some people have had homophobic reactions to the show, but these reflect attitudes of the viewers—attitudes which “Husbands” clearly offers an opportunity to consider and, hopefully, change.  Again:  it’s a show with many layers beyond its giddy, glitzy surface.  As such, “Husbands” is a trail-blazing triumph, a bold first step;  it will be fun to see what follows in its footsteps. 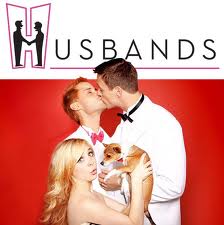 Whore In The Window

Conan, Craig Ferguson, Jimmy Fallon, Bill Maher, David Letterman.  What do these fine men have in common?  They haven’t interviewed me.  Yet.


Being interviewed is part of the job of being a celebrity or promoting a product, service or agenda.  It’s a way of letting people know about something.  Actors and writers need to do interviews in magazines, webzines, television and web shows to help broaden their audience.  If acting is like being a whore, then doing an interview is like being a whore in the window at the Moulin Rouge; it’s a glimpse of what you have to offer.


My latest whore-in-the-window stint (or “interview”, if you prefer) was actually a lot of fun.  And, money and fame aside, fun is the only real reason to do anything.  (Actually, fun is the only truly satisfying reason to do anything.)  I had been interviewed as a writer  by Actors Reporter a year or so ago for a production of my stage play “Cold Lang Syne”.  Now their sister station “Actors Entertainment” was having me talk about my acting as well.


The studio is small, but the atmosphere is warm and friendly.  Producer/director Pepper Jay meets me, offers me coffee and explains the logistics of the shoot, DP John Michael Ferrari gives me camera notes and my host, the beautiful Kristina Nikols, arrives looking like she just walked out of a glamour magazine.  As she alights next to me, I suddenly feel akin to Quasimodo.  I just needed a bell tower.


The show begins.  It’s a live chat show so we’re taking questions from online viewers.  What surprises me is that questions come almost immediately.  But it’s a kick because, if there weren’t any questions, we’d never know we were being watched.  (Well, we’d know, but it’s more fun to interact.  And I did mention “fun” is the name of the game.)


We talk about my acting and my writing and I answer all kinds of great questions posed by Kristina as well as by the folks out in cyberland. The amazing Assistant Editor Roxy Shih manages to insert all kinds of appropriate media into the frame as we talk not only about my projects, but about charities I support (like “The Trevor Project”) and even the double  rainbow that had made an appearance in the sky the night before.  Intern Josh Thrower expertly fields questions from the online viewers.  It's a well-run, very fun shoot.


And, before I know it, we’re wrapping up and the show is over.  All good things, eh?  So until next time, thanks to the glory of technology, you can watch the interview if you missed it by clicking on the photo below.   Yeah:  the one of Beauty and the Beast!  ;) 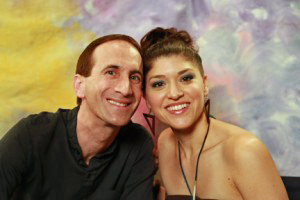 Posted by Gregory Blair at 8:40 AM No comments: