"Trick and Treats": A Horrific Journey


As an actor, filming a movie is always a journey.  Sometimes it’s a journey to a dark place you would never want to go in real life.  Such is the case with “Trick and Treats”, the new horror film from Heroic Age Studios and Frightful 5000 Films. 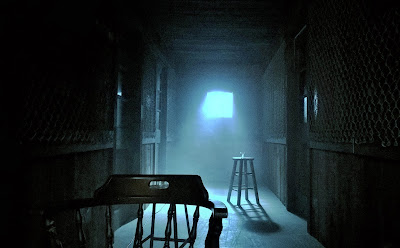 “Trick and Treats” tells the tale of one Halloween where a group of young folks find their revels take a wrong turn, causing a gang of sadistic bikers, a psychotic woman off her meds and a demon-possessed jack-o-lantern to collide in a maelstrom of crazy and carnage. Writer/director Eric Hector’s script is an assault of human and inhuman horrors and his team has gone all out to bring the brutal beast to life.

Hector runs his set with such an unwavering air of calm and courtesy, you would think he’d spent years as a kindergarten teacher.  Such a genial presence is a boon on any film set, but on a set where characters are screaming and in hysterics take after take, it’s a blessing.  The camera crew, led by Tim Lynn and Patrick Donoghue work the Red like a dream, making the action around Brett Hector’s gorgeous sets look moody and marvelous.  AD Joan Hector and producer Laura Richter are on hand and hands on, wearing multiple hats, to make sure everything runs smoothly and the rest of the crew was as diligent and delightful as you could wish.

In front of the camera, I was surrounded by a bounty of talent.  It was thrilling to see actors unafraid to go anywhere and to work with whatever moment-to-moment surprises emerged to create truly horrifying scenes. The film has some exceptionally wretched characters and truly brutal moments and it was inspiring to be in the moment with these kind, lovely professionals as they turned into such terrifying monsters; it made it more comfortable for me to go farther than I expected and push myself to be even more horrible than I had planned.  I’ll never look at a certain power tool the same again.

If brutal horror films are your thing, something to make you squirm is on its way.  I apologize for your therapy bills in advance. 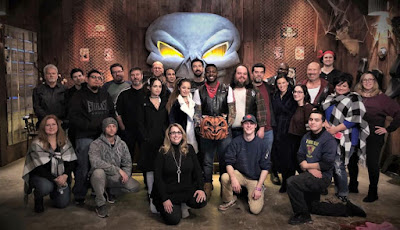 Posted by Gregory Blair at 6:26 PM No comments: