Call me revolutionary, but I found much to praise about this year’s Oscars. While everyone seems to be whining and arguing about what won or didn’t win, what was included and what was not, and endless other elements—some of them of import and others of petty insignificance—I would like to take the road less traveled and comment on what I found to be rewarding, because praise is more welcome than criticism to the receiver and more pleasing to the giver and the world could do with a bit more focus on the positive.


First off, I was pleased that wealth was spread around nicely: the awards were handed out to many different films instead of all being heaped on one. This is especially appropriate and gratifying when all the nominees were so incredibly worthy and picking a winner seemed a crime. I am delighted that Argo, Lincoln, Life of Pi, Les Miserables, Amour, Django Unchained and Brave all got nods; they all had elements of greatness within them—as did all the other films. It felt like a night that celebrated all film, not just one or two and that just feels better to my mind and soul.


Second, I enjoyed the abundance of quality musical numbers directly related to the industry, performed by people in the industry. It was a treat to see Charlize Theron and Channing Tatum and then Joseph Gordon-Levitt and Daniel Radcliffe join Seth McFarlane in dance numbers that gave a us a loving taste of old Hollywood glamour. We were then treated to a nod to the movie musical genre with the terrific montage of classic numbers from Chicago, Dreamgirls and Les Meserables. But the prize-winning, show-stopping moments came from divas Shirley Bassey and Barbra Streisand, singing two of their signature film songs in tributes to Bond and those who passed on this year.


Finally, I was pleased to see a return to an outward display of respect for the event and a sense of genuine pleasure. I saw far less sunglasses and gum-chewing and an abundance of women in truly beautiful gowns and men looking dapper in slick suits and tuxes. And yet, despite the upscale dress, the prevailing attitude was one—not of ego or ennui—but of joy and gratitude.


So, yes, I could complain about what I didn’t like about the evening; there were elements that disappointed and even concerned me. But I’d rather shout out about the good stuff; what you make the most of is usually what you remember. So would you rather remember things you didn’t like…or things you did? What do you want for your “misty, water-colored memories”? As for me, I’d like to remember Charlize and Channing, Joseph and Daniel, Shirley and Barbra.

Posted by Gregory Blair at 4:39 PM No comments: 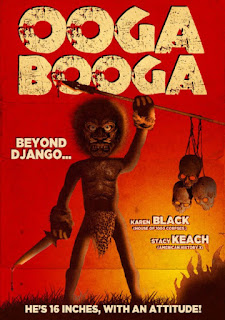 I am still wearing my director hat as post-production of the feature film “Deadly Revisions” continues. But then, with my actor eyes, I spy an audition to play a director in a new Full Moon Features film called “Ooga Booga”. I go for it and the next thing I know, in between actually being a director, I am now also playing a director…for a third director—and a rather famous one at that.


Charles Band has directed dozens of films and produced over two hundred, so it’s exciting to be added to his impressive body of work. Not to mention “Ooga Booga” also has two personal acting icons of mine in it: Karen Black and Stacy Keach; Mr. Keach’s creepily stoic turn in “The Ninth Configuration” is a favorite of mine…and Karen Black’s roles in “Burnt Offerings” and “Trilogy of Terror” are not only classic in my mind, but—funnily enough—both receive loving nods in “Ooga Booga”. So I am thrilled and honored to be involved in the project.


The icing on the cake, of course, is my role which, though small, is an ironic riot. I play a neurotic, nebbish director who loses his patience with a slobbery drunk actor who is the clown host of a children’s show. Mr. Hambo, the clown, is played to the hilt by Chance A. Rearden, whose make-up includes a pig snout dripping snot. It is hilariously repulsive—as is his behavior in the dressing room and on set in front of the children. So I proverbially flip my lid and fire him—right on the set, in front of the wide-eyed tiny tots. It’s a double scenery-chewing bonanza in under five minutes. Mr. Band directs the scene fluidly, giving adjustments and improvisations along the way. His relaxed demeanor, expert eye and concise communication are a master class in direction.


So I was a vacationing director playing a frazzled director for a relaxed director who taught me how to be a better director.


You might say things are going in the right…er…direction.


Posted by Gregory Blair at 4:56 PM No comments: