It’s a Dirty job…And I love It!

Black gunk oozes from my lips as I grab the policeman’s head and he shrivels and falls to the ground, dead.

Just another day on set.  This time in Buffalo, New York for Adam Steigert’s THE HORRIFIC EVIL MONSTERS, where I am playing Famine—one of the Four Horsemen of the Apocalypse.

I worked with Steigert on FANG a few years back, so I knew I was in good hands with him and his crew.  That matters when you’re being asked to work in a remote, danger-laden location, wear a blindfold and fill your mouth with gulp after gulp of unappetizing liquid.

Yes, Adam’s version of Famine is a filthy, blind, drooling, skeletal mess in rags.  Makeup artist Phill Beith works magic and, in about an hour, turns me into the ghoulish creature and thus I remain for the rest of the day’s shoot.  It’s actually not as limiting as some character touches: I have the use of my dirty fingers whereas fellow Horseman Death and Conquest have such long fingernails, they need assistance more than I.

One scene also involved a prosthetic torso piece that was glued in place and then filled with gooey chunks to resemble my guts.  I cannot express just how lovely that was.

But it’s all in a day’s work on the set of many genre pictures—especially horror and sci-fi, where creatures often roam.  And THE HORRIFIC EVIL MONSTERS has a bounty of creatures.  Enough to make genre fans drool. 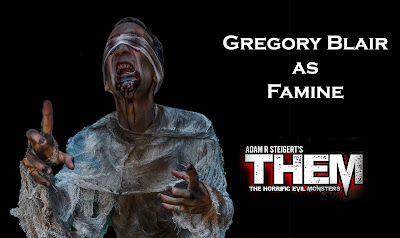 Posted by Gregory Blair at 6:02 PM No comments: