Who Do I Shoot First?

Who…and where and with what is more like it. Professor Plum?  In the Library?  With a Steadycam?  Creating a shot list and schedule for filming is crucial to a smooth and successful shoot: the shot list and schedule details who needs to be on set, when, and what they’ll be doing.  In short, it’s the agenda for your production. Unfortunately, it’s also like trying to piece together a jigsaw puzzle with too many sides.


On one side, you have your locations and the dates you have to use them.  Usually, that’s in concrete.  However, within each day, there is the question of what rooms and in what order to shoot them.  You want to shoot all the lobby scenes together, so you don’t have to waste time moving the crew and equipment, but…


…you also don’t want to schedule anyone—including actors—if you’re not going to make good use of them.  So if there are five  lobby scenes, but different actors are in each scene, what are you going to sacrifice?   You’re paying a day rate for everyone to be there whether they are involved in one scene or ten; the obvious goal as a producer is to maximize the work you get for your dollar.   So do you shoot the lobby scenes and pay actors to be on set for only one scene, or do you arrange the day around the actors and have them working the whole time, but moving the crew and equipment?  You end up going with what’s cheaper: your cast or your crew and equipment.  On smaller films, the camera and crew generally cost more, so you’ll often have actors hanging round all day.  They’re idle and bored and...and you’re paying them a full day’s rate for less than a full day on camera.


And then there’s the question of off-camera time.  Does your actress have a shower or swimming pool scene?  She’ll need time to blow dry her hair and get prepped for the next scene.  Does your actor need three days of beard growth for a scene?  When is he going to get the days off to do that without ruining other scenes?  And the list can go on.


So what do you do?  You put all the variables into each decision for each shot and then for each transition between shots and then for each day as it butts up against the next.  And, if you’ve done your job right, you should have a fairly smooth production.


Or you’ll have a fairly memorable lesson learned.


~
If you’re reading this and you’d like to help out with my current project, click on the link below and donate securely through PayPal. You can be a producer and help make “Deadly Revisions”--a new psychological thriller/horror film starring Bill Oberst Jr.  Check out the teaser trailer. You could even be in the movie!  I promise to have a decent shot list!

For more info or to donate to DEADLY REVISIONS the movie: www.DeadlyRevisionsMovie.com

Posted by Gregory Blair at 3:30 PM No comments:

No, we’re not talking about the three most important things in real estate: we’re talking about finding the perfect place to film a movie; specifically, the psychological thriller/horror film DEADLY REVISIONS.


In DEADLY REVISIONS, horror movie writer Grafton Torn (played by genre favorite Bill Oberst, Jr.) struggles with amnesia, having woken from a fall that landed him in a coma. To rest and recuperate, he takes refuge in the vacation home of his best friend: a remote cabin in the woods.

Sound familiar? It should: the cabin in the woods is a staple of the horror genre and, since DEADLY REVISIONS is a valentine to the genre, fans will enjoy homages throughout the film—including the setting itself.


The trick for the DEADLY REVISIONS team was to find a location that would suit the narrative and budgetary needs of the film. It had to be a certain size, have a certain look, have the right surrounding atmosphere. Furthermore, since DEADLY REVISIONS was a low budget independent production, the location had to be affordable: not only did the daily rate need to fit the bill, but so did the proximity because housing cast and crew at a distant site was not an option.


A handful of possibilities came across the radar and producer Roxy Shih, Director of Photography Kate Sobol and I all took part in visiting them to review each one for the aforementioned requirements as well as ambient noise issues, shooting restrictions and other factors. So we went from location to location to location. Each one was a fantastic place to shoot, but each one also had drawbacks. In the end, only one location would work for our film. It was a bonus to learn the cabin at our chosen location was the same cabin that had been used for “Friday the 13th, Part 4”; so we’d get another nice wink for devotees to enjoy.


So DEADLY REVISIONS had its cabin in the woods. All we had to do now was kill people there. 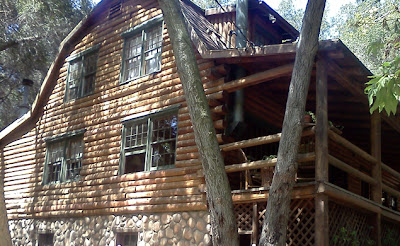 
Posted by Gregory Blair at 5:56 PM No comments: