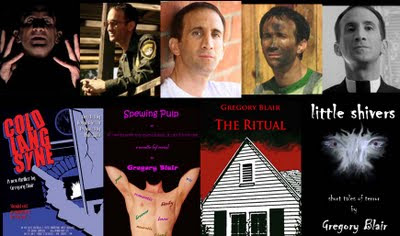 Schizophrenic.  Imbalanced.  Unfocussed.  These are a few of the suspicions you sometimes get when you reveal yourself as a hybrid actor/writer.  That’s changing as more and more artists cross lines and perform more than one profession.  But you still run across prejudice from time to time:  that one art takes necessary focus from the other; that you can’t do one as well as the other; that you can’t love one as much as the other.   So let me shatter those myths.


Myth #1:  Your true calling takes all your focus:  you don’t have time for more.
Who says?  Lots of folks have two jobs in today’s world.  Most spend eight hours or less at one thing and the other eight at something else—often many things—completely unrelated to whatever they do in those first eight hours.  So spending some hours a day devoted to writing and some to acting shouldn’t make anyone balk.  When I’m performing in a film, obviously I spend significantly more hours acting than writing.  And when I’m not acting in a film, I spend more time writing.  As far as my focus and time, the two disciplines have a perfectly complementary relationship.

Myth #2: You can't possibly do one as well as the other.

There are so many examples of actor/writer hybrids who succeed brilliantly at both that this argument should never enter anyone’s mind:  Steve Martin, Woody Allen, Orson Wells, Will , Carrie Fisher—to name a few.  In fact, even in this list, there are actor/writer/directors.  I’d argue most of them are as capable in one category as another.  And yet folks still hold to the belief that you can only really excel at one thing.  I like to think I act and write well.  I’ve gotten recognition for both.  And if I do one a little better than the other, I couldn’t tell you which.  It would likely end up a matter of opinion; subjectivity is always a part of the arts and one’s appreciation of them.  And, since I don’t care which I do better, I continue to merrily pursue both.

Myth #3: You can only have one true love, one true passion, one true calling.

In a world of infinite diversity and possibility, I’m staggered at people who limit their thinking like this.  I know it makes things easier to comprehend if we box them up, label them, and put them orderly onto shelves.  That, in fact, does seem to work for the most part in the physical world.   But in the world of ideas, the world of passions, the world of appetites, boxes and shelves have no place: such things blur lines and defy boundaries; they are, in a word, limitless.  So why not love more than one thing?  Why not love as much as you can?  If you have a passion for something, why not explore it?  If you have a passion for something else, why not explore that, too.   Life is a bounty; try many things.


So there you go.  Hope I’ve demystified the actor/writer hybrid.  And if I’ve inspired you to try something new, let me know.  I’d be thrilled.  I’ve always been a cheerleader for positive change. 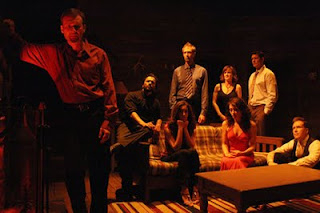 I always liked thrillers.   Sleuth.  The Mousetrap. Deathtrap.  Stage thrillers had become few and far between and, frankly, I missed them.  So I decided to write one of my own.  But what could I do that was different?  I decided to push the envelope:  I aimed to write something that would be a valentine to the classic, melodramatic shockers, but also embrace comedy as many film thrillers had successfully done...and then go one further and include some timely social commentary and use the medium to hopefully teach and enlighten.  My idea was to make a thriller for our generation.  Ambitious, perhaps, but I love a good challenge, now and then.


I had invited a director friend of mine to dinner.  My motive was clear:  I wanted to talk him into directing a play I hadn't written, but one that I thought was brilliant and, what’s more, had a role in which I thought I’d be brilliant.  (I’m allowed my opinion, no?)  After pitching the idea for all it was worth, including why my friend was perfect for the job, I gave him the opportunity to jump at the prospect.  Instead, he killed it.  Mercilessly.  The play I had in mind was a drama (mostly) and he said the only thing that would really interest him was a thriller.


Funnily enough, I had just finished writing mine and now it was exactly what the doctor (or “director” in this case) had ordered.  I gave him a copy and he was hooked.  So we dumped the body of my other proposed project and began to rework my script more to his taste.  Then we gathered a production team, had auditions and, that winter, my New Year’s Eve murder mystery “Cold Lang Syne” had its World Premiere.


It was glorious.  My director friend and the amazing cast and crew took what I had created on the page and brought it to unforgettable life on the stage.  The set, dressed with potential weapons, dangerously sharp antlers and a fanged boar’s head looked remote and creepy, the lighting added darkening shadows, and the audiences laughed and screamed in all the right places. They loved it.  “Cold Lang Syne” was an instant audience favorite.
In fact, after attending a performance, film producer Redford Mejia of 701 Productions asked to meet me for dinner.  So my story begins and ends with a dinner.  Only at this dinner, Mejia tells me he wants to make “Cold Lang Syne” into a movie.  Funnily enough, I had just finished writing the screenplay…

Posted by Gregory Blair at 5:53 PM No comments:

Send In The Clones 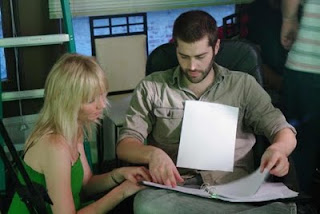 The dynamic duo of Longshadow Productions

Some things are too good to be true.  As an actor, you are job hunting constantly:  even if you’re already on a job—unless you’re on contract for a few years—you have to spend your “off” hours hustling and hawking, meeting and greeting and generally informing or reminding people you’ll be available and eager to work any day.  This is true even if you have an agent.   The endless self-pimping is necessary because jobs are not just going to fall in your lap unless you’re a DeNiro, a DiCaprio or a D cup.


I had done a web series for the dynamic duo that makes up Longshadow Productions—an up-and-coming outfit of entrepreneurial chutzpah that had cast me as a rabbit-eared, megalomaniacal sorcerer in the sci-fi/fantasy The Immoral Dr. Dicqer (see earlier blog “I was A Green Screen Demon”). They had now come up with a new, equally whacky project and offered me the lead.  Yep:  no searching through casting posts, no elbow rubbing or schmoozing, no auditioning—nothing; just a director handing me a script and saying: “Wanna play the lead?”


I knew I had not become a DeNiro or a DiCaprio, so I quickly looked at my chest to make sure I hadn’t suddenly grown a jaw-dropping set of man-boobs.   To my relief, Pamela Anderson had nothing to worry about; I was still me.  The director later confessed it was simply my work on Dicqer  that got me the job.  There is almost nothing sweeter to hear than that work previously done left someone wanting to see more of you.  Unless, of course, you’re a stripper.  Then it’s just cheesy.


So what, you may ask, does the blog title above have to do with all this?  To which I answer (whether you asked or not) as follows:  the new series is about a modern, married mad scientist couple who have created the perfect clone.  I play the lead geek/slacker scientist husband…and his delightfully dysfunctional clone.  Needles to say, I’m beside myself.  Literally.   The show is witty, rude and really, really funny.  I think you’ll dig it.  I think a lot of people will.

Posted by Gregory Blair at 10:14 AM No comments: