Once upon a time, I more regularly shared my thoughts of each trip to Broadway and the shows I would see.  But one day I thought: “Who cares what I think?”  And while the answer may still be “no one”, I’ve decided to put down my thoughts on my most recent visit to the Great White Way because I wonder if I’m alone in my yearning for days gone by, if I’m romanticizing the past, or if something is missing from the newer breed of original productions.


Of the four shows I saw, three had elements of greatness, but not one of the three was a solid, flawless show.  The talent on stage (and in the orchestras, where they existed) proved uniformly stellar as did the direction and design of the shows.  Brilliant comic timing, singing and dancing bubbled forth in abundance across the board and the musicals proved exceptionally clever and eye-popping in their presentation.  The core of any show, though, is the writing and—in both scripts and scores—these shows suffered from weaknesses that made me less than fully enraptured.


Matilda is buoyed by witty set design (an alphabet-infused choreographed number, a child-spinning shtick and self-writing chalk are but a few of the treats) and the incredibly talented adult cast members who actually steal the show from the children—which is a feat in itself, since the little tykes are all damn good.  But the story ambles and the score is sketchy:  half of the score is strong, with several bona fide showstoppers, but other songs miss the mark; while Act Two pulls out completely undeveloped "magical" elements.  Matilda won me over, but more on style than content. And I can't get the anthem "Revolting Children" out of my head.


The fact that A Gentlemen’s Guide to Love and Murder won “Best Musical” but not “Best Score” tells me I’m not completely mad that I found the patter-inundated score forgettable and tiresome at times.  It’s an entertaining enough show and, rather uniquely, one that has a better second act than first, partly since the former takes too long to get its stride with too many of those aforementioned unmemorable songs.  However, the talented cast sings it all beautifully and Jefferson Mays as virtually the entire D’Ysquith family is comic Broadway gold, aided by clever direction (which also won a Tony) and stage effects that make the murders jolly good fun once they get going.


Then we come to the newest hot ticket item:  Terrence McNally’s It’s Only a Play.  Newcomer Micah Stock is surrounded by giants Nathan Lane, Megan Mullally, F. Murray Abraham, Rupert Grint, Stockard Channing and Matthew Broderick; the stars are all at the top of their game and young Stock still manages to stand out as an adorably dopey coat steward.  The play promises and provides countless laughs and gags, though some are far from timeless:  too many jokes are so au currant they’re doomed to demand constant rewrites or die once this cast and season are gone. Poor Mr. Broderick is also saddled with dull didactic diatribes on the meaning of theater which stop the play cold.  Fortunately, the whiny and preachy passages are outweighed by the frothy good fun. The cast delivers McNally’s yuks and shtick with laudatory gusto and panache; yet even a shiny disco ball (used twice, no less) does not distract from the fact the play is anemic fluff.


But then, like an unexpected miracle, there is Once.  It likely surprised many that such a small show would take eight Tony Awards for 2012 (including “Best Musical”), but I’d say it was kismet because it would have been a shame for this near perfect show to have been buried by more monolithic musicals.  Everything about Once is inventive and on point.  The cast is also the orchestra which, since the show is about musicians, is contextually appropriate (as opposed to recent John Doyle gimmickry).  The audience is invited to join in—literally—as the musicians have a pre-show jam fest and theater guests can come on stage and have a drink amidst the merriment.  Thus, Once wins the audience over before it has even technically begun.  Then the show starts, almost seamlessly and, unlike the aforementioned theatrical offerings, there’s not a wasted or weak moment.  The songs all have a place and a point, the scenes are adroit and the characters fresh, full and flawed.  No more than ten minutes into the show, lead Paul Alexander Nolan sings the signature song, accompanied by the refreshingly offbeat Jessie Fisher; the simple and sweet melody paired with Nolan’s haunted eyes and soulful voice is so achingly beautiful, it’s enough to make a grown man cry.  Not once.  Twice. No amount of stage machinery, celebrity or marketing can compare with great writing, be it music, lyrics or prose—especially when it is brought to life with such raw and passionate talent.


And so, while I may have begun this with something akin to a dies irae, I can assure you great theater is alive and well.  We only have to take risks, seek it out and support it.  You never know when you will find something that will make you weep with astonishment at how beautiful art can be.
Posted by Gregory Blair at 10:40 AM 2 comments: 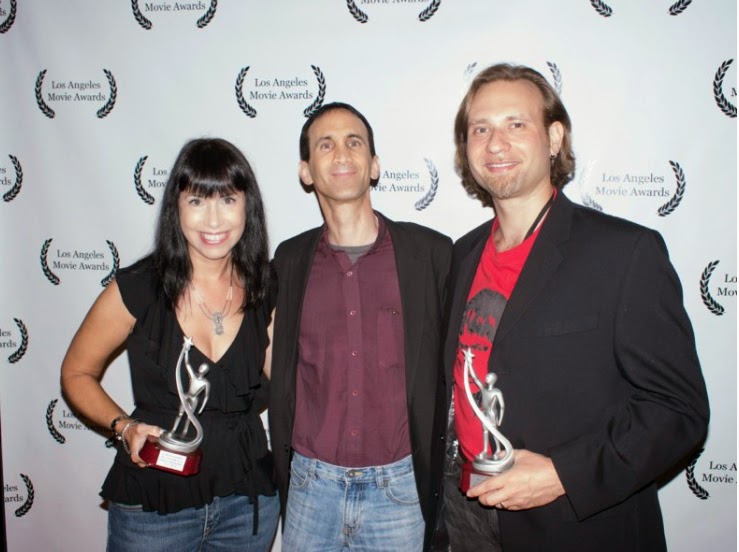 Actors Lise Hart and Mikhail Blokh and our awards.
My film DEADLY REVISIONS had its world premiere in Los Angeles last month.  It came with great fanfare:  not only was I notified I had been accepted to the festival, I was informed my film had won two top accolades!  Yes, our first film festival and we were already the proud recipients of the L.A. Movie Awards for Best Narrative Feature and Best Actor (For Bill Oberst, Jr.).  Not a bad beginning at all.


The festival was hosted by my friend Stephen Tako, a terrific bonus, as he’s a very gracious, supportive fellow actor.  The screening was also the first opportunity a few cast and crew had to see the film.  Then, of course, there were the awards.  With Bill out of town shooting another film, I ended up with my hands full. Fortunately, I had the help of the other actors for some of the red carpet photos as you can see above.   The wins have spurned more distributor interest and it has been an experience to see what has come our way.  But I’ll discuss more about that at a later time.


So if you’d like to see the film ahead of any release, grab a ticket to one of the screenings.  And, since festival directors love when the director is present to talk about the film, it’s my goal to make an appearance at as many screenings as possible, so look for me and come say “Hello”.

"Visionary!"
(A Bucket of Corn)


Posted by Gregory Blair at 5:39 PM No comments: