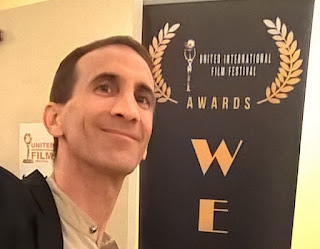 First time hitting the festivals as a filmmaker? Well, congratulations! Now, what the heck do you do when you get there? Here’s a short run down of some basic DOs and DON’Ts, based on my past experiences.

1.  FIRST THINGS FIRST:  Sign in, get your tickets, SWAG Bag and Filmmakers Badge and whatever else is offered or needed to get into the various screenings, panels and parties.
2. GET PRESS:  Find Press Badge people and hand them your Press Kit, flyer or poster and tickets to your film. Smaller festivals may not have Press Badges, so just use your best judgment. The goal is photos and interviews. You may not win an award, but great press is its own reward.

3. BUILD RELATIONSHIPS: Hand a business card to press folks BEFORE they start interviewing. It can help them during the interview or later in editing.  Then, get their card before they leave to follow up & build relationships.  Hand cards to other folks, but AFTER they ask for it: establish interest first; mindless card shoving is pushy and annoying.

4. LOOK GOOD: Pause after each question to allow for a good edit point and repeat the question before answering or incorporate it into your answer. Also: repeat your film’s title often so it gets in the final interview, no matter how they edit it.

5.  STAY POSITIVE:  Avoid confrontational & budget questions:  you could turn off or lowball a prospective buyer. Focus on the pitch you’ve practiced and stick to it...with a smile.

1. DON’T BE LATE:  You are making an example of how you are on set and in production meetings. Be on time to all screenings and panels. It’s rude to show up late.  People will notice and be turned off instantly.

2. DON’T LEAVE EARLY:  I see this time and time again. If your film is part of a block of films (as short films usually are) do not get up after your film and leave if there are more films to follow. It’s disrespectful and we all see you and no one wants to work with a rude, selfish jerk. Stay for the entire block. Also, don’t leave early right after your film because people may want to talk with you about it and it could lead to a new relationship that will prove valuable in the future.

3. DON’T BE THAT GUY:  In the theater, turn your cell phone off. Phone ringing, buzzing and even the glow of texting and tweeting are all beyond offensive in this arena while the films are playing. Again: you are making an example of how respectful you are to your peers. And don’t talk during anyone’s film. Ever.

4. DON’T BAD MOUTH:  Do not say anything negative. Not about a film, filmmaker, or anyone. It only makes you look bad. Even if you leave and go to a nearby bar or restaurant; you never know who else from the festival may be there as well. Festivals are about celebrating, honoring and building relationships. Keep it that way. Negativity will only harm you.

I hope what I listed is helpful. If you have other things you think are just as important, please feel free to leave a comment. I want film festivals to be joyful for everyone.  After all, they call it a festival for a reason.


Now, go out there and be festive!