I’ve been working on a lot of projects and failing to blog about them, but this latest adventure was too exceptional to not share.

I had the great fortune to be asked to be a part of Aaron Mento’s insane horror/comedy “Ugly Sweater Party”—a film that goes where no one would ever suspect…and one that has no limits to how far it will go.  The term “outrageous” doesn’t even come close! 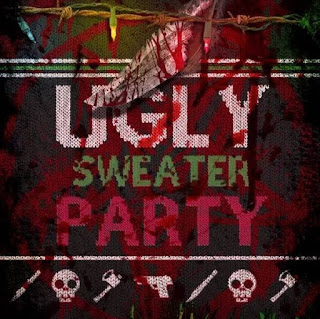 The story revolves around two friends who go to an ugly sweater party to hook up with two historically “easy” girls. Trouble ensues when the party proves to be at Counselor Mandix’s dysfunctional Bible camp full of disturbingly crazy characters—including closet case Mandix, himself.  Things only get worse when one of the boys gets possessed by a sweater that hosts a demonic spirit out for revenge.  It’s wickedly funny, gleefully bloody…and quite the yarn!

My character, Counselor Skinkle—in short shorts and an awful orange headband—is the leader of the rival camp that arrives to compete in a few of the more legitimate games that are peppered through the piece.   No surprise, Skinkle is as twisted as the rest of the characters: an arm wrestling match between two campers that he and Mandix oversees turns into a hilariously inappropriate groping session.  (Kudos to Colton Wheeler for being such a good sport!) Marv Blauvelt and I goofing behind the scenes.

With formidable writer/director Mento at the helm and a powerhouse crew backing up him—led by Director of Photography Paul Stephen Edwards—the shoot is professional, swift and spectacular.  Glorious drone shots, severe low angles and other camera techniques are all used to maximum effect; the costume design boasts exceptionally ugly sweaters; and the fx makeup is…well…killer! 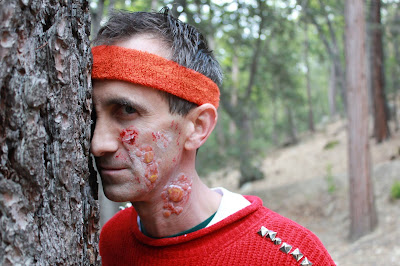 Some unfinished, but killer make-up effects

The icing on the cake is the incredible cast, including Felissa Rose, Hunter Johnson, Charles Chudabala, Marv Blauvelt, Tiffani Fest, Kevin Caliber, Berna Roberts, Matt Holbrook, Emily Dahm and many other talented and beautiful people who are as much fun on camera as off. 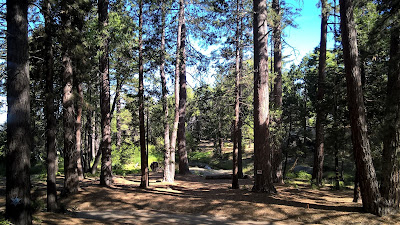 Much of the film (my scenes included) were shot on location at a campsite in breathtaking Idyllwild.  (Cheers to Garrett Miller for doing the driving!)  The sweeping tree-lined landscape provided not only a beautiful backdrop, but also a familiar one for a genre where the combination of city folk and isolated woods always ends badly.  So it should come as no shock that, by the end of “Ugly Sweater Party”, the trees are just about the only things left standing.

But, hey:  if ya gotta go, at least go in cashmere!

Posted by Gregory Blair at 11:40 AM No comments: