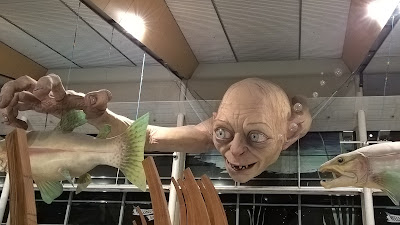 A giant Gollum fishing in the Wellington Airport.


Been There, Done That
I should mention it’s not my first time to New Zealand, so many sites and experiences previously enjoyed were not repeated.  With exceptions.  So if your favorite New Zealand must-see is missing from what follows, chances are good I hit it before.


Behind the Scenes
The first noteworthy stop was to the Weta Workshop.  The talented folks at Weta are the men and women behind the magic of an impressive catalogue of films from smaller indie offerings like “Dead Alive” and “Heavenly Creatures” to studio blockbusters like “Lord of the Rings”, “Avatar” and “Mad Max: Fury Road”.   The artists in residence create weapons, costumes, make-up effects and creature suits, full-scale vehicles, miniatures and more. Below is my encounter with a "Lord of the Rings" troll. 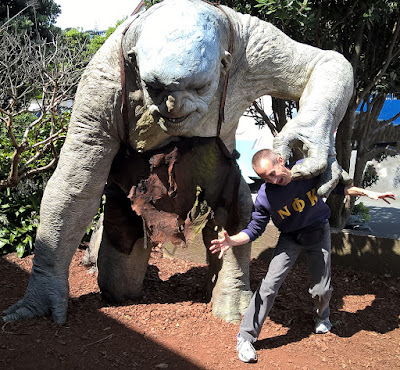 Lions and Tigers and...Wallabies?
A day at the Wellington Zoo—a beautifully landscaped place—provided an opportunity to learn more about saving wildlife, becoming more “green” and the animals with which we share the planet.  Impressive and adorable animals everywhere: emus, wallabies, meerkats, monkeys and the ever illusive kiwis, of course! Lots of great photos to be had—including one of these two exceedingly relaxed wallabies.  They took it lying down. 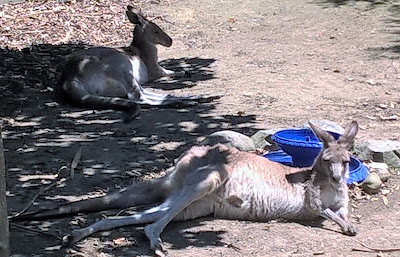 Art, Culture and History
A trip to the festive wharf included the incredible Te Papa Tongarewa Museum which hosts an amazing collection of nature, culture and history—complete with many levels of interactive elements, rotating exhibits and more.  Pictured below is a traditional Maori hut. 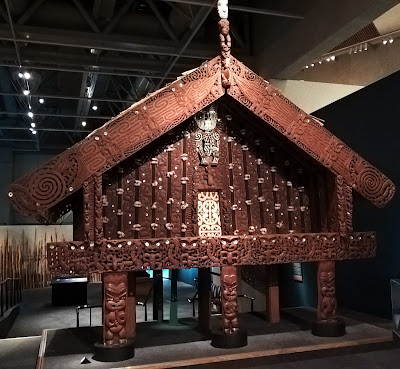 Hobbit Habitat
We headed upland, passing Tasman Sea coastlines, fairytale forests, desert flatlands, craggy canyons and rolling farmlands smothered with unending cows and sheep.  After lunch at Lake Taupo, we arrived in Matamata and crashed for the night.  Come morning, we were off to tour the farmland where they filmed the Hobbiton sections of “Lord of the Rings” and “The Hobbit”.  They’ve lovingly maintained the entire shire, from Bag End where Bilbo lived to The Green Dragon where all sorts—including us—imbibed hearty grog.  Here I am doing my best grumpy hobbit in front of Bilbo’s house. 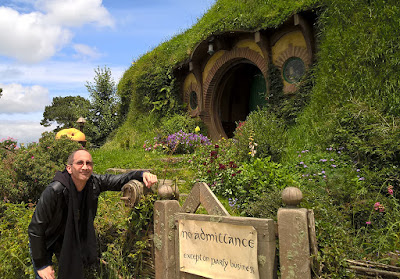 Owlcatraz
Don’t let the over cute and kitschy name fool you:  this is a charming, family owned animal habitat/farm with gorgeous scenery in addition to the small but diverse section of wildlife that includes far more than just the nocturnal birds that ask “Who?”.  Magnificent forest, lily ponds and fields surround you as you have up-close meetings with alpacas, donkeys, a monstrous and well-trained hog and more—including many birds in addition to the adorable and mysterious owls.  A very lovely, low-key experience, with time to pet and feed lots of the animals.   The hog pictured below is housetrained, sits on command and is generally smarter than most politicians. 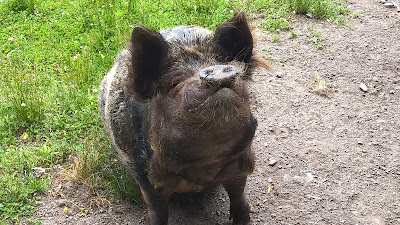 Star Wars
Episode 7 came out while we were abroad and saw it we did.  It was a welcome throwback to the older films where you cared about the characters, the action was focused around them and the tone was frothy and fun. The script was contrived and obvious, but the film delighted in spite of its flaws and earned bonus points for a black man and a woman taking the lead roles.  By the empty seats, it was clear the Kiwis weren’t nearly as crazed to see it as folks in the states were. More of my thoughts on the film in my previous blog entry, if you care.

Christmas
The holiday was spent in what is known as the White Man’s Valley on the sprawling grounds of some of friends of the family.  They have a pool, a duck pond, and a small farm complete with donkeys, pigs, sheep and a very friendly goat who wanted to be pet by me all day.  The human company was delightful as well;  the dinner spread proved beyond spectacular and the desserts sinfully delicious.  The home is also a bed and breakfast, if you’re ever in the area.  Just be sure to tell the goat I said “hi”. 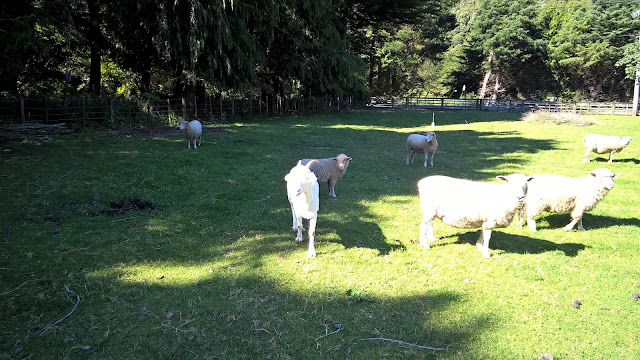 Wine & Waves
We crossed the Rimutaka Range on a steep, winding road with breathtaking views and spent a day in the Wairarapa region to enjoy window shopping in charming Greytown, lunch in wine country at the John Murdoch Winery and a frolic on the beach at Ferry Lake.  The clear blue skies made all three places postcard perfect.  Below is a shot of part of the Rumitaka. 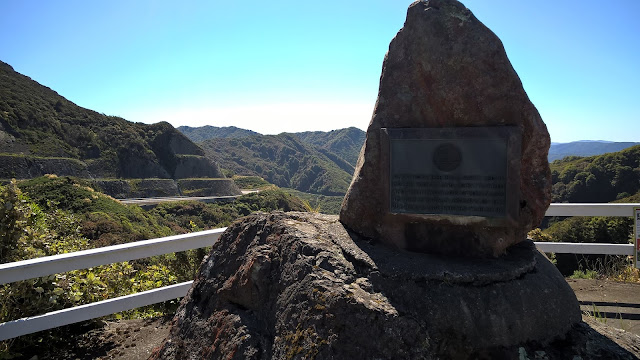 There were, of course, many other dinners and parties, including a traditional Christmas morning round the tree with gifts and a very special 80th birthday party for a favorite feisty matriarch.   We left knowing we had enjoyed ourselves and had plenty of photos and stories to share.  As it should be.  Here’s Smaug at the Wellington Airport, wishing us safe travels. 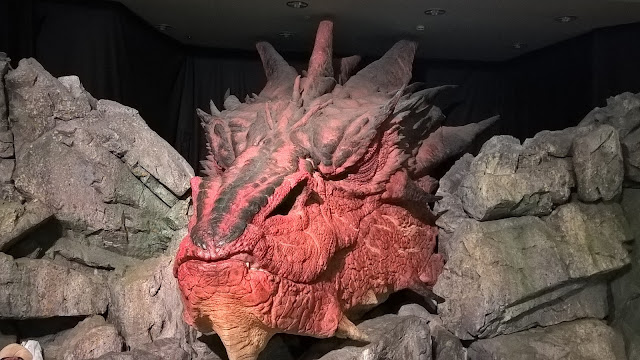 Have you been to New Zealand?  If so, where?  If not, where have you been?
Posted by Gregory Blair at 2:55 PM No comments:

Star Wars Thoughts: What Force Should We Awaken?

Desert planet waif finds droid with secret inside leading to quest that ends in destruction of a giant weapon.
--Episode 7.  I mean Episode 4.  I mean…

The brouhaha over the latest Star Wars movie leads me to believe any additional analysis is not only unwarranted but most likely moot.  However, I wanted to lay down my thoughts on the matter for my own reference years from now for, while it is certainly not a revelation to suggest that the enduring success of the Star Wars franchise is a testament to the power of storytelling, it also seems a testament to a few other things as well and Episode 7 further reveals to me many things about modern man’s enchantment with movies—some more blatant than others.


Most clearly, we crave stories with characters we care about to make the journey worth the investment.  Episode 4 succeeded brilliantly not just because of its dazzling world of special effects, but because of the characters that filled that world.  While Episode 7 is derivative (see synopsis above), contrived (an uber high tech facility can’t do something as simple as locate intruders) and obvious (who didn’t see Han Solo coming a mile away?), we forgive because we have been offered characters we care about—both new and old.  The thrilling action sequences and related effects that are part and parcel of the franchise remain, but they are all focused around the characters and their quests and never become about the action itself.


Another positive note is the fact that the leads are an independent, whip-smart, strong woman and a courageous, heroic black male.  Yes, there are still lots of white males running around, but we’ve come a long way, baby.  The woman out-fights and out-smarts men left and right and the black man doesn’t die as they so often do in films: he fights hard—with heart—and lives to see another day.  It may all take place in a galaxy far, far away, but it’s starting to look more and more like our own.  And that’s a good reflection, in this case.


But there is a Dark Side.  Happy as I am that audiences once again are as excited about a movie as they used to be, the fact that the world will plunk down collectively over 500 million dollars in one weekend for 2 hours’ entertainment while there are people lacking basic food and shelter is a sobering statement of our blindness to the twisted priorities of our day.  Think about it:  the amount of money spent to make and watch this film could certainly be put to more humanitarian uses.  I’m not saying we should cease feeding our imaginations—a vital road to solutions, discoveries and creativity—but perhaps we should feed starving children first…or at least at the same time or in as impressive an amount.  After all:  the more healthy and inquisitive minds we cultivate, the greater the potential for a brighter future.  If we can see our way to come together as a force for the good of the planet and its inhabitants, we may indeed discover A New Hope.


May THAT force be with us.  Soon.