I was in HELL 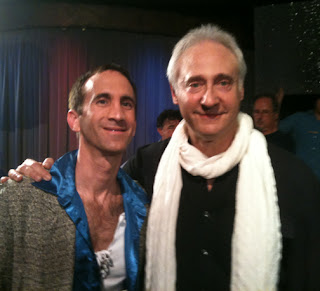 Me & Brent Spiner on the FRESH HELL set

For those of you unfamiliar with the actor Brent Spiner, rather than admonish you, I will simply state that he’s a multi-talented actor who has brought many memorable characters to life.  Besides originating the role of Franz/Dennis in the original Broadway production of Stephen Sondheim’s “Sunday in the Park with George”, he also made impressions on television (“Night Court”, “Friends” “Frazier”, etc.) and in film (“Independence Day”, “I Am Sam”, etc.).  But he is probably best known for his role as Lt. Commander Data on “Star Trek: The Next Generation”.

Loaded with referential humor, insider jokes, stinging satire and belly laughs, “Fresh Hell” is a fun ride.  And I got the honor of taking part in an episode for season two.

The shoot is a breeze:  the crew is an exceptionally congenial and efficient group, which makes the logistics of the shoot trouble-free.  It's also a bucket of fun because Brent and Kat are about as down-to-earth and charming as you could wish--as are the writer, Harry Hannigan, and director, Christopher Ellis.  Then there's the script; it's so screamingly funny that we all lost the fight at times to refrain from bursting out laughing during the first rehearsals of each take.  So much talent and good energy; it couldn’t have been a better experience.  In fact, it was the best day in Hell I've ever had.

I recommend everyone watch season one, if you haven’t.  And then watch for me in season two as a Guido in Brent’s acting class. 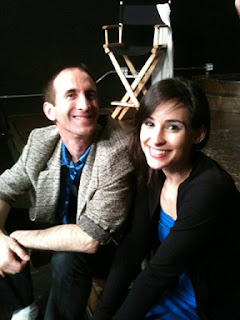 Me & Kat Steel on the FRESH HELL set
Posted by Gregory Blair at 12:03 PM No comments:

Fun on the Red Carpet

﻿
A while back I had been one of the leads in a short film by director Phil Volken. The film is called “The Great Venice Robbery” and I played a hapless, stuttering homeless urchin named Pookie. It was an exceptionally clever and fun film. Phil had now gone on to direct a feature called “Garbage” which was to have its premiere at Grauman’s Chinese Theatre and he extended an invitation to me which I gladly accepted. The film was a satire on the Hollywood celebrity machine and featured cameos of Daryl Hannah, Michael Madsen, William Baldwin and Steven Bauer. Sounded like fun.

My first thought was who to bring as my guest. The answer came almost as soon as the question entered my mind and I called up my friend Bill Oberst Jr.--a fellow actor and an indie horror film icon. Bill’s a warm, wise man who’s always good company so I was happy he accepted my invitation. We got ourselves duded up and arrived at the screening.

As we waited to get onto the red carpet, we bumped into more friends: Ron Ranson (my fellow “Robbery” actor, who had a cameo in “Garbage”), adorable scream queen Devanny Pinn and handsome actor/director Brandon Slagle (who both worked with Bill on several projects). Then we hit the red carpet and let the photographers have their way with us. It’s always fun to see what photographers call to you and ask you for several poses or shots and which photographers look glazed over. I just get a kick out of wondering how many of the photos will turn out making me look like the undead. The dorky undead.

We survive and take our seats for the show. Phil and producer Alina Shraybman speak beforehand, not looking a day older than the last time I saw them. Then the movie starts and the laughter begins. The whole experience is just about as much fun as you can have in a tux jacket…without getting plastered and making an embarrassing speech about a bride and groom.

So...who wants to be my date for the next red carpet?

Posted by Gregory Blair at 2:13 PM No comments: