There was something for everyone this year and talent all over the map.  I’m way behind in my movie going, but here are the highlights for me thus far (in no particular order):

THE SHAPE OF WATER
Guillermo del Toro’s gorgeous, beautifully cast love letter to old school movies: part creature feature, part romance, part thriller—adult, yet childlike…with a dollop of magic and even a dash of musical.  It’s the first time I’ve cheered out loud in a movie in a long time.

THREE BILLBOARDS OUTSIDE EBBING, MISSOURI
Martin McDonagh’s writing and directing provide many fine moments in this odd, fascinating film where no one’s hat is all white or black…and his cast (including Frances McDormand, Sam Rockwell and Woody Harrelson) makes those moments powerful and memorable.

I, TONYA
A crazy brew of mockumentary and biopic, Steven Rogers’s script is jaw-dropping creative and Craig Gillespie’s direction makes it shine.  It doesn’t hurt that the acting is off the charts—with Margot Robbie and Allison Janney practically burning the screen down.

THE DISASTER ARTIST
James Franco pulls off a tour-de-force performance in this film about a modern day “worst movie ever made”.  It’s hilarious and painful to see him and his fine cast members recreate the making of “The Room”—especially with Franco going nuts as Tommy Wiseau going nuts.

GET OUT
Jordan Peele’s terrifically creepy tale is sort of a slick re-imagining of “The Stepford Wives” with racism replacing sexism.  The script creates all manner of unsettling elements and Peele’s direction and his cast make the most of them.

OKJA
A splendorous movie about a not-so-splendorous future where corporate greed is still heartless as ever and one little girl’s quest to save her beloved “super pig” is both thrilling and inspiring.  Bong Joon-ho’s film is full of wit and wonder and Tilda Swinton gives another knockout performance.

I know there are many more.  But even these few prove that movies are alive and well and making the world just a little bit better.

What were your favorites of the year?

Posted by Gregory Blair at 9:59 AM No comments:

A new year always brings new opportunities to better ourselves and our world.  If you haven’t figured out what to do, here are some ideas.  They all come from the same place:   do no harm.

1.      Stop harming the planet.
a.  Get a hybrid or non-polluting car.  Even a smaller car would help.  Get solar.  Walk more.  Stop smoking. Become an activist against the use of fossil fuel.  Reuse more.  Recycle. Use less.  Tell your waiter “no straws, please”.  Always bring reusable bags when shopping.  Every action, especially when multiplied, makes a difference.  Be a part of making the world a better place.  It feels fantastic!

2.      Stop harming people.
Be kind and respectful above all else. We’re all neighbors, sharing one planet that we must work together to save.   So, lose your old ideas of “us vs. them”.  We are all “us”.  Race, religion, gender, orientation, and other factors of humanity do not separate us from “us”.  Eschew all ideas, words, laws—anything that disenfranchise or vilify others for their mere identity. Every time you draw a line, you cut us all—including yourself.  But love, respect and kindness make the world a beautiful, joyous place.

3.      Stop harming animals.
a.  Stop eating them.  It’s better for your body, the planet and the animals.  Factory farming is a huge cause of global pollution. And eating animals is tantamount to murder. The plant kingdom provides everything you need to be healthy.  Even one less meat meal a week helps.  Avoid eggs, too, because mass production includes throwing male chicks in shredders.  Seriously.  Don’t be a part of that horror.
b. Stop wearing them.  Most clothing and makeup production involving animals is just as cruel.  Don’t promote animal torture and death.  It doesn’t look good on you.
c. Stop buying them from stores and breeders.  There are too many adorable furry friends in shelters and rescues.  Every store-bought pet is a rescue dog or cat’s hope shattered.  Be a hero and save a life.  It’s the greatest feeling in the world.

So, there you have it.  Three ways to make you and the world better, brighter and happier. 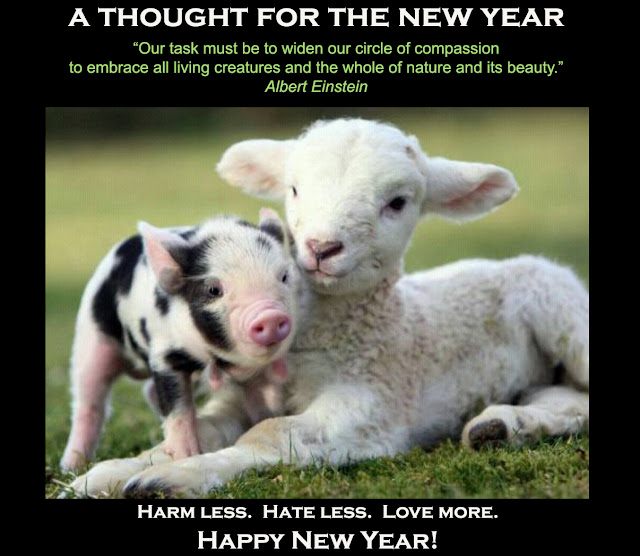 Posted by Gregory Blair at 10:38 AM No comments: