The Story of How Things Work

I wrote a biopic script over twenty years ago. It got optioned once, but never produced. So, it sat on the proverbial shelf collecting proverbial dust for decades.

Then, I was in a production of the musical “Working” a decade or so later. Theater is such an act of love and investment; I always make friends that last a lifetime when I do it. In this case, I met Jacquelyn Levy.  We did another musical together nearly a decade later.

Then, just last year, she hooked me up with a novelist who wanted to do a joint screenplay and novel deal about a famous musical group. I sent him a copy of my thirty-year-old script as a biopic sample. He dug it and so I started the new script.

A few months later it was done, and he started pitching it. A producer contacted me to get a copy and find out more. I told her the story you’re reading right now.  She asked me to send her the new script as well as my thirty-year-old script.

A few weeks later, she called and said she wanted to produce the script that had been collecting proverbial dust for decades.

In short, it took time, friends, networking, patience, and the script finding the right person for this story to have its long-overdue happy ending.

“Behind the Smile: The Story of Hattie McDaniel” is slated to go into production this June.

The moral of the story is: things have a way of working that you may never be able to force or foresee. So, make your art and let what happens happen. 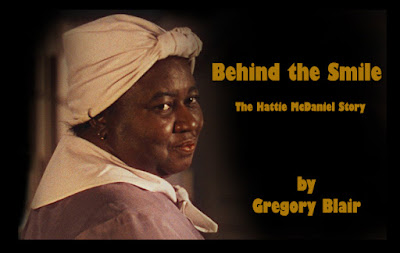 Posted by Gregory Blair at 7:43 PM No comments: